Cardiff People First is a self advocacy and community advocacy organisation. We are run by and for people with a learning disability in Cardiff. We stand up for our rights and campaign to change attitudes, get better services and enjoy more opportunities. We fight for equality, understanding, respect and acceptance.

Cardiff People First was formed in 1992 as the Self Advocacy Forum to support service user involvement in county planning. Residents of Ely Hospital joined and set up Ely’s People First. The group had a big effect on the resident’s quality of life until the closure. They made a film called Getting Our Voice Heard.

In 1994, at the first conference, delegates changed the name to People First South Glamorgan and agreed a constitution. In 1995 the name became People First Cardiff and the Vale.

When funding from the Vale of Glamorgan Council stopped in March 2000, we became Cardiff People First. Learning Disability Wales (then called SCOVO) hosted us from 2000 to 2004. 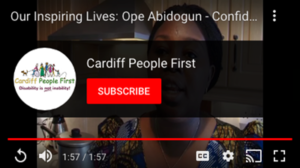 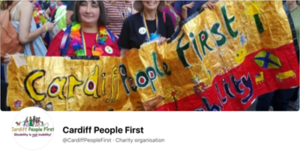 Cardiff People First is run by people with a learning disability. We are *people* first! If you can help us, please donate https://t.co/8JjFmD1lNa

Yes! All our trainers have a learning disability, because it makes such a difference, even films don't get people to understand the same way as meeting someone in person.